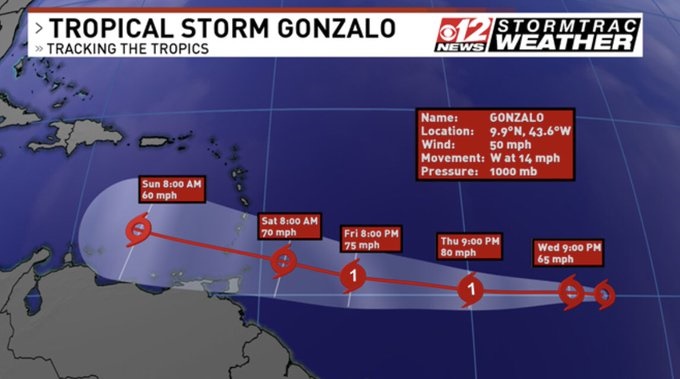 PHILIPSBURG:— Tropical Storm Gonzalo formed Wednesday morning in the Atlantic Ocean, the National Hurricane Center said. It’s the earliest “G” storm in any Atlantic hurricane season on record.
The storm is expected to become a hurricane Thursday, with winds of at least 75 mph.
The hurricane center said Gonzalo was far from land: As of 5 p.m. Wednesday, it was about 1,110 miles east of the Southern Windward Islands of the Caribbean. The system had maximum sustained winds of 50 mph and was moving to the west at 14 mph.
“Gonzalo is expected to move near or over the southern Windward Islands this weekend and could bring direct impacts from winds and heavy rainfall,” the hurricane center said.
It is forecast to weaken back to tropical storm strength as it nears the islands.
When Gonzalo became a named storm Wednesday morning, it broke a record set by Tropical Storm Gert, which formed July 24, 2005, during a notorious season.