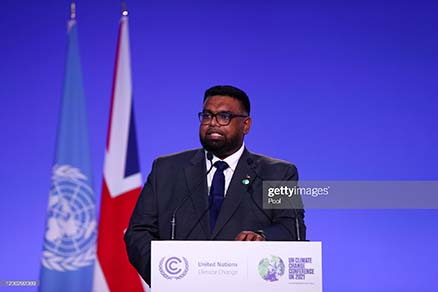 These Caribbean Nations Pledge To End Deforestation By 2030

The five are: Belize, the Dominican Republic, Guyana, Saint Lucia and Suriname. They are among 100 plus countries in the world to take the pledge.

The commitment is being described as a “landmark moment” for nature and, on the day of its launch, has already garnered financial support pledges of GBP8.75bn from national governments and GBP5.3bn from the private sector. The UK Government is providing GBP1.5bn to the initiative.

Under the commitment, nations commit to halt deforestation and land degradation by 2030, and to enter into a period of restoration by this point if possible.

Funding will be provided to developing nations as a priority, supporting projects that restore land degraded by land-use change for agri-food, other commercial activities, flooding, drought and wildfires.

“With today’s unprecedented pledges, we will have a chance to end humanity’s long history as nature’s conqueror, and instead become its custodian,” UK Prime Minister Boris Johnson said Monday.

In addition to the 2030 commitment, a separate statement on Forests, Agriculture and Commodity Trade (FACT) has been signed by 28 nations collectively representing 75% of global trade in key commodities that can threaten forests, such as palm oil, cocoa, soya and paper and pulp.

The commitment from the Caribbean nations come as Belize Prime Minister John Briceno called for “climate justice” and urged the developed countries to discontinue their support of fossil fuels even as he acknowledged that Belize is doing “more than its fair share” to try and stop global warming.

“Belize is the proud custodian of the Belize Barrier Reef system, the second largest barrier reef system in the world and a UNESCO World Heritage Site. But here is the sad reality: coral bleaching, distress doubled from the period 1985 to 2014 to severe level 3 between 2014 to 2017,” he told delegates.

Meanwhile, Barbados Prime Minister Mia Mottley Monday urged the international community to agree to a 1.5 degree Celsius mark regarding the environment warning that anything higher than that would constitute a “death sentence” for countries in the Caribbean and other Small islands Developing States (SIDS).

Antigua and Barbuda Prime Minister Gaston Browne, urged the developed countries to adhere to their commitments to assist Small island Developing States (SIDS) meet the challenges posed by climate change warning: “If sea level rise does not get us first, we will surely drown in debt.”

Browne, who is also Chair of the Alliance of Small Island States (AOSIS) said: “We are here to deliver on commitments made but we are closing out 2021 with ambition that puts us on a pathway to overshooting the 1.5 goal. Ambition is our litmus test.”

The global average air temperature may rise by more than 1.5 degree Celsius mark over pre-industrial levels between 2021 and 2040, according to the Sixth Assessment Report (AR6) of the Intergovernmental Panel on Climate Change (IPCC) released on August 9, 2021.