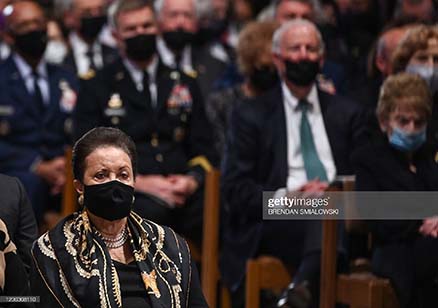 News Americas, NEW YORK, NY, Sat. Nov. 6, 2021: The US’ first black, Caribbean and Jamaican American secretary of State, Colin Powell, was laid to rest following a funeral Friday that included a nod to his Jamaican roots.

The leader general and son of Jamaican immigrants, was remembered for not just his leadership skills and his love of Bob Marley’s music.

He was also remembered for “his sense of humor, his insatiable curiosity, and his comfort in his own skin” at his funeral service Friday that drew presidents past and present, military leaders, and hundreds of Washington dignitaries.

President Biden, first lady Jill Biden, and two of his predecessors — Barack Obama and George W. Bush and their spouses — joined Powell’s wife, Alma, and other family members for the religious service at the Washington National Cathedral.

Powell, the former secretary of state and chairman of the Joint Chiefs of Staff, died last month of complications from COVID-19. He was 84 and had been battling a rare blood cancer.

Alma Powell attends the funeral of her husband and former Secretary of State Colin Powell in Washington, DC on November 05, 2021. (Photo by BRENDAN SMIALOWSKI/AFP via Getty Images)

Powell is survived by his wife Alma, daughters Linda and Annmarie, son Michael and grandchildren.

ABOUT HIS JAMAICAN PARENTS

Before there was Colin Luther Powell, the man who would go on to become the US’ National Security Advisor, Chairman of the Joint Chiefs of Staff, and the first black and Jamaican American Secretary of State, there was Luther Theophilus Powell, his Jamaican immigrant father.

Luther Powell emigrated from Kingston, Jamaica and entered the United States at Philadelphia, Pennsylvania, aboard the Manchioneal on April 26, 1920. He filed this Declaration of Intention to become a U.S. citizen on December 12, 1929.

Luther Powell was born in Top Hill, Saint Elizabeth, Jamaica on May 18, 1898, to Aubrey Spencer Powell and Rosina Bromfield. In the US, he became a shipping clerk and married Maud Arial McKoy. She was born on January 4, 1901, in Westmoreland, Jamaica to Edwin Octavius McKoy and Alice Rebecca Coote.

She immigrated to Ellis Island, New York City, New York, United States in 1923 and married Luther Theophilus Powell on December 28, 1929, in Harlem, New York City. On April 5, 1937, she gave birth to a baby boy who they named Colin Luther Powell. Ten years earlier, they had given birth to their first child, Marilyn.

When the little Colin was 4, his family moved to the South Bronx so his maternal grandmother, Gram Alice McKoy to take care of the children as Luther worked and his wife continued to sew.

Colin Luther Powell attended the now closed Morris High School, from which he graduated in 1954. While at school, he also worked at a local baby furniture store, where he picked up Yiddish from the Eastern European Jewish shopkeepers and some of the customers. He also served as a Shabbos goy, helping Orthodox families with needed tasks on the Sabbath.

From high school, he went on to City College of New York, where he received a Bachelor of Science degree in geology in 1958. He joined the U.S. Army through ROTC, starting as the youngest second lieutenant commissioned in the dawn of a newly desegregated Army.

Powell served two combat tours in Vietnam; he was injured during both. Injuries sustained in a helicopter crash from which he pulled two fellow soldiers earned him medals for bravery during the second tour.

While serving in the military, Powell met Alma Vivian Johnson on a blind date. The couple married in August 1962.

After receiving his Master of Business Administration from Georgetown University, Powell began a White House Fellowship under President Richard Nixon in 1972.

Almost two decades later, in 1987, President Ronald Reagan named Powell national security advisor. The president later named him chairman of the Joint Chiefs of Staff, the highest military position in the Department of Defense. The appointment made Powell the youngest chairman ever and the first of Afro-Caribbean American heritage. He was also the first former ROTC member to hold the position.

These Caribbean Nations Pledge To End Deforestation By 2030

Upon graduation, he received a commission as an Army second lieutenant and underwent training in the state of Georgia, where he was refused service in bars and restaurants because of the color of his skin. After attending basic training at Fort Benning, Powell was assigned to the 48th Infantry, in West Germany, as a platoon leader.

Captain Powell served a tour in Vietnam as a South Vietnamese Army (ARVN) advisor from 1962 to 1963. He returned to Vietnam as a major in 1968, serving as assistant chief of staff of operations for the 23rd (Americal) Infantry Division.

When he returned to the US from Vietnam in 1971, Powell earned a Master of Business Administration degree from George Washington University in Washington, D.C. He later served a White House Fellowship under President Richard Nixon from 1972 to 1973. During 1975-1976 he attended the National War College, Washington, D.C.

Following the Iran-Contra scandal, Powell became, at the age of 49, Ronald Reagan’s National Security Advisor, serving from 1987 to 1989 while retaining his Army commission as a lieutenant general.

In April 1989, after his tenure with the National Security Council, Powell was promoted to four-star general under President George H. W. Bush and briefly served as the Commander in Chief, Forces Command (FORSCOM), headquartered at Fort McPherson, Georgia, overseeing all Army, Army Reserve, and National Guard units in the Continental US, Hawaii, and Puerto Rico. He became the third general since World War II to reach four-star rank without ever serving as a division commander, joining Dwight D. Eisenhower and Alexander Haig.

During this time, Powell oversaw responses to 28 crises, including the invasion of Panama in 1989 to remove General Manuel Noriega from power and Operation Desert Storm in the 1991 Persian Gulf War. During these events, Powell earned the nickname “the reluctant warrior,” although Powell himself disputed this label, and spoke in favor of the first Bush administration’s Gulf War policies.

Powell took an early resignation from his tenure as Chairman of the Joint Chiefs of Staff on September 30, 1993 after 35 years of service and with the rank of general. In 1995, Powell wrote his autobiography, My American Journey,’ in which he paid tribute to his parents.

In 2001, Powell was appointed, confirmed and sworn in as the first Black and Jamaican American US secretary of state and the 65th United States secretary of state, serving under Republican President George W. Bush.

As secretary of state, Powell gave a speech before the United Nations regarding the rationale for the Iraq War, but he later admitted that the speech contained substantial inaccuracies.

He resigned in 2004, following a prostate cancer diagnosis and went on to write the second of his two books, It Worked for Me, Lessons in Life and Leadership, while continuing his relationship with the Colin Powell School for Civic and Global Leadership at City College of New York.