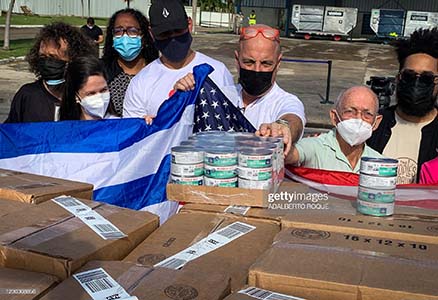 4 weeks ago·1 min read
ShareTweetPinShare
Home
Caribbean News
Caribbean COVID-19 Death Tally Nears 25,000
The content originally appeared on: News Americas Now
Cuban has seen the most deaths from COVID-19 in the region and its economy has been harshly impacted. Here Cuban-American Carlos Lazo (C), member of the organization Puentes de Amor, shows part of the humanitarian aid brought together with members of The People’s Forum and CODEPINK NGOs, at Jose Marti international airport in Havana, on November 5, 2021. The aid, consisting of 18,000 pounds of canned tuna and pasta sent by Cubans and Americans from Miami, was received by the Martin Luther King Center members and will be distributed to Cubas eastern provinces. (Photo by ADALBERTO ROQUE/AFP via Getty Images)

The majority of the deaths or 8,262 has occurred in Cuba while the second highest number of deaths or 4,150 was reported in the Dominican Republic.

Trinidad and Tobago and Suriname have the fifth and sixth highest number of COVID-19 deaths at 1,772 and 1,117, respectively.

However, Barbados, Suriname, Guyana and Trinidad and Tobago have all registered deaths linked to the coronavirus (COVID-19) pandemic over the past 24 hours as St. Lucia registered more positive cases of the virus.

Barbados health authorities confirmed that five people have died from COVID-19, bringing the total number of deaths from the virus to 180.

A 91-year-old man, who was fully vaccinated, died at the Blackman and Gollop Isolation Facility.

In Suriname, three people died from the virus in the past 24 hours, bringing the death toll for the first week of November to 24.

This Star Gets A Caribbean Mansion For A Birthday Present

In Guyana, a 58-year-old woman has died after she was infected with the COVID-19. According to the Ministry of Health, the woman was fully vaccinated. Guyana’s death toll now stands at 942 since March 11, 2020; 16 of those deaths have been recorded in November.

In Trinidad and Tobago, the authorities have reported eight deaths on Sunday, including six males and two women. Their deaths bring the total in the country to 1, 772 since March last year.

St. Lucia health authorities reported on Sunday 32 new cases of COVID-19 from a total of 274 samples, which were collected between November 4-6th. They said the number of positive cases diagnosed in-country to date is 12,737.